At least one member of the blog tour (none other than RLM) found the episode of Daniel in Elfland the most interesting. Frankly, there is so much that one can choose from. I also found the tale delightful. It was an interesting twist in the book. Daniel does not go back to the zany subterranean world of yfelgopes, cranky wizards, and blind women on an island in a dried up ocean, stone cities, and such. The contrast could not be starker.
As soon as Daniel arrives he is aware of a potent difference, even from the normal world he had come from; it seems to be the expansiveness of the place (and as we learn later, the time too) - there is the sun in the sky, a forest on the distant horizon, a lone mountain on the other, and a vast uninhabited, unobstructed green meadow. One has the impression that there is a powerful presence there, not apart from but immanent in the world. How immanent?
Daniel heads for the forest (a contrast to the stone under-world of Niðergeard) where he is approached by Kay Marrey who informs Daniel he is in Elfland - the Faerie realms. Daniel’s experiences in this land are loaded with anticipation for the further unfolding of the story itself. Kay explains that in the Faerie realms, objects have ownership. To put it in unvarnished terms, the inanimate has personhood! The paper that Daniel was given at St. Michael's church, just before he passed through the lych-gate into Faerie land, turns out to be a leaf.

Kay reached into the front pocket and pulled out the slip of paper that Daniel had been given. Except now, when Kay held it, Daniel saw that it was a leaf. A large yellow oak leaf.

“Where did that come from?” Daniel asked.

Kay Marrey held it upright by the stem, between his thumb and forefinger. “You were given this, yes? In your world. Did you know what it was?”

“At first, I thought it was money.”

Interesting. Given that the material stuff of Elfland holds the immaterial quality of ownership, it looks as if the leaf was used by someone not to merely send Daniel to that world, but to make him a permanent vassal there. Why? And how did the one who passed it to Daniel in this world, at the church, get it? That’s important as we learn that person's identity to be one of those critters that Daniel runs into at the beginning of the novel, who obviously would be entirely out of place in Elfland - not a native inhabitant. Are there insiders there cooperating with outsiders?
There is something about Elfland that is disturbing, however. The notion of ownership by the inanimate is disturbing enough. But it goes even deeper. This comes out when Daniel reveals to Kaeyle (the stoic charcoal maker) and his wife, Pettyl (love that name!), that he has made an arrangement with the merchant, Reizger Lokkich, by which he would return to his (and our) world. Kaeyle is doubtful.

Kaeyle ... said to him. “Daniel, don’t do this new deal. Stay with us for the next few days and take the surer, more natural route home.”

“No, I have to get back soon. I’ve heard my friend’s voice calling me--twice now. I just feel--I need to get back as soon as possible. She needs me.”

“It may not be in the plan that you reach her so soon.”

“The plan of the universe. The natural order that instructs all things, that guides the hearts of all living things.”

Daniel is skeptical of the ‘Plan.’ Pettyl tries to explain.

“Don’t think of it as a plan--think of it as all of the created worlds working in an ideal state. Nothing is set, but things have a best course. Within this we may stay on our course, or travel a different one. If we go this other way, then we have made things disordered, and it may be difficult to correct after that. More, it may knock others out of alignment.” (p 308)

This has the feel, though not the humor, of Dr. Emmett Brown warning Marty McFly that if they’re not careful they might disturb the space-time continuum and destroy the universe.
What is behind this? Deism? Panentheism? Open theism? Daniel follows the logic.

“...it seems to me like the universe needs a little helping hand to correct things. And if I can, then why shouldn’t I? Is it the ‘ideal state’ that good people suffer?”

Daniel felt his blood warm and skin tingle. Things were falling into place now; it was getting clearer. “I was brought to this point by the universe--by God. This has happened to me before. Here I am, further away from my ‘ideal state’ than I’ve ever been. I’ve been put in an almost impossible situation, once again, and I know that I have the ability to win through and set things right. If there is a universal plan, then there’s no way I’m not a part of it. I’m probably the only one in this world who can fix things and the universe knows it--that’s why it brought me here. First I’ll fix this problem and then I’ll go back and fix my own.”

There is a confusion of a personal God with an impersonal universe. Daniel is quite confused here and though there is a soul-zinging moment of clarity for him, an epiphany, and as dramatic as it is, it is an epiphany of delusion. I’m not chiding Mr. Lawhead at this point. On the contrary, it has great potential to bring the truth of the Triune God into bold relief. This is the precarious nature of Christian fantasy. It can sound like the author is advocating a pagan, non-Christian world-view, but he is not. He is setting it up for the truth to come thundering in, in due time. We will see what Mr. Lawhead does with this opportunity.
Thanks to Thomas Nelson for kindly providing a copy of The Realms Thereunder for review on the February 2012 Christian Science Fiction and Fantasy Blog Tour.
Ross Lawhead's Web Page
List of CSFF Blog Tour Participants
The Realms Thereunder on Amazon

'The Oerken Tree' - Book 1 of The Whole Creation Groans 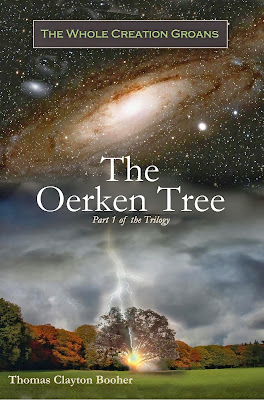 Now an eBook for the Kindle on Amazon